As part of my continuing project to get my stuff stored somewhere other than some musty backup folder on my computer, I've set up a Vimeo account.

You can see my latest films here:

At the moment these are a bunch of short clips from my African trip in November 2005, but if I understand the widget rightly it'll update with whatever I subsequently load on there.

Great practical cheese advice from my friend Gordon in this this interview for The Kitchn.

A: It's OK to eat the rind whenever you feel like eating the rind. It's OK to leave the rind too. Taste a little bit if you can't decide. If it's bitter, dirty-tasting or too hard, don't eat it."

I love the cheese-positive attitude of the Rainbow Grocery cheese folks.

You can't turn this into Annie. 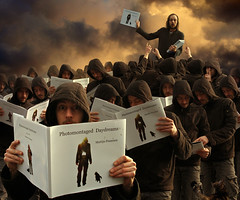 Fellow fans of photo-artist Mattijn Franssen will be pleased to learn that his work is busting out of the confines of Flickr and into book form.

I've been impressed by the quality of Blurb publications in the past, so I'll be getting a copy of this one.

The secret of happiness is this: Let your interests be as wide as possible, and let your reactions to the things and persons that interest you be as far as possible friendly rather than hostile.