Loved this very cool NPR piece on the 10th anniversary of the "web log". Travel back in time to the beginning of this blog, also dating back to the late 1990s. First mention of the word "blog" here? May 24, 1999 (the post titles were added later when I brought these pre-blogging software posts into Blogger & later Movable Type).

Nice short little article from the SF Chronicle mentioning great San Francisco bartender William "Cocktail Bill" Boothby, whose 1907 book The World's Drinks & How To Mix Them you may recall my mentioning as the source of the Ruby Cocktail, our featured drink last New Year's Eve.

There's high praise for Boothby in a 1934 piece in The Recorder, quoted here (scroll down to "The Immortal Masterpiece of Mixology").

Bill was placed behind the famous bar of the Palace Hotel by the discriminating Colonel Kirkpatrick. They were all aces behind that mahogany, and Bill was the ace of aces. To see him rotating three cocktail glass between the fingers of his left hand while measuring a jigger of gin or vermouth with the right was to witness a masterpiece of art in the making. Alas! Prohibition came, and Maxfield Parrish's "Pied Piper" looked down upon no more cocktail and highball devotees.

Sadly, I'm not sure the current staff behind the bar know the glorious history. Elixer's counter-example isn't enough to convince me that the presence of televisions in a bar indicates lesser skill on the part of the bartenders.

Boothby fans stay tuned; how does Dinah spend an afternoon off? At the library in the historical collection, photographing every page of that 1907/1908 edition of The World's Drinks! This & other public domain treasures coming soon to a Flickrstream near you...

How did I not know of the the Genographic Project of the National Geographic Society? What a totally cool use of all the new techniques for studying genetic information! I'm eagerly awaiting the arrival of my kit.

Next up: uncluttering the fridge with Serious Eats advice. 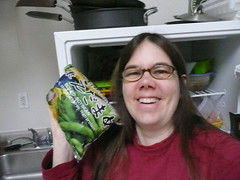 I've made my donation to the Frozen Pea Fund. Have you?

A couple photos from Jinx:

"Dinah reading a Christmas story from the 'Little House on the Prairie' series, while Susie listens intently."

Jinx's view of the proceedings:

Back to Larry's pictures:

Lots of goodies for you today, most of them found via the amazing kottke.org, the only non-Achewood website I read almost every single day.

First some horror, the Bush administration's approach to executive privilege: an executive order cannot limit a president, the president can determine whether an action is a lawful exercise , and the Department of Justice is bound by the president's legal determination. By those rules, Watergate wouldn't have justly brought down an administration acting against America's best interests. Scary, scary stuff indeed.

You can wash the bad taste out of your mouth with some science by reading this cool piece by Bernard Foing on what Earth would be like if we didn't have a moon and how having a moon has influenced life on this planet.

The first four minutes of The Kingdom are a fascinating whirlwind tour of the history of American-Saudi Arabian relations.

And your moment of zen (thanks to Jessamyn!): a running buffalo.

p.s. One more great video link courtesy of Beau: A truly great little video by wonderingmind42 talking about how to approach major scientific/social questions like the fear of catastrophic climate destabilization (a.k.a. "global warming"). (Good work, sports racer! It's great to see how Ze Frank's The Show has helped this kind of project bloom).

This is a half size version of this intriguing recipe from Drinkboy: www.drinkboy.com/Cocktails/recipes/Stargazer.html
with a substitution on the bitters.

I can see how it would make a good food pairing.

Oh and a nice view of one of those cocktail glass treasures from Goodwill.

I used the nifty new Edit Photo function to crop this down after having taken it with my phonecam since for some reason the memory card on my new camera thinks its full and I wanted to drink the drink before downloading all the pictures.

As you may have read here before, I like me some science when I'm commuting or doing dishes - the two main times I put on my iPod and listen to podcasts.

Scientific American continues to deliver the best stuff, both in their short 60-Second Science daily series and in the longer Science Talk episodes.

Now you science-phobes stick with me here. The more you know about how living creatures reproduce the more entrancing the world becomes.

My favorite episode of the ones I've been catching up with has a great piece with University of Wisconsin evolutionary biologist Sean Carroll on the role of gene duplication in evolution. Totally cool stuff.

First, some background: all living creatures have molecules of DNA in their cells. DNA carries genetic information which controls the traits of the living creature. To quote Wikipedia, a gene is a hereditary unit consisting of DNA that occupies a spot on a chromosome and determines a characteristic in an organism. Genes are passed from parent to child in sexual species through the combination of genetic material from each parent. This process is called meiosis (pronounced my-oh-sis).

You've probably seen a diagram of DNA which looks like a long zipper. What happens in meiosis (in simplistic terms) is that each of the parent zippers gets unzipped and zips back together with the other half of the other zipper, so you get the mother's and father's DNA getting hooked together. What happens in this process is genetic recombination and that is an opportunity for change since the parents' DNA will not be identical. In other words, meiosis and sexual reproduction produce genetic variation.

What that means is that the living creature could have traits or behaviors which are different from its parents and/or from the offspring of other creatures of the same kind.

And what that means is that it might have a better chance of surviving (or at least breeding) in its particular environment. If so, it becomes more likely than those other creatures to pass its genetic material on to its own offspring. Multiply this by hundreds or thousands of generations and you've got survival of the "fittest".  By "fittest" I mean the most able to survive (or at least breed) in a particular environment. It's not "best" - there's no goal or ideal here; it's just what currently, under these conditions works.

As you can imagine, migration of a creature into a new area can introduce new genetic variation in the population - the gene pool, if you will - of that area.

The last but certainly not least factor in genetic variation is mutation. Again to quote Wikipedia, mutations can be caused by copying errors in the genetic material during cell division [including meiosis!], by exposure to ultraviolet or ionizing radiation, chemical mutagens, or viruses, or can occur deliberately under cellular control during processes such as hypermutation. The resulting changes can be small or large - even as large as complete duplication of a gene - and may or may not have any effect on the creature's traits or behaviors.

If a mutation makes a creature less successful at surviving and/or breeding, it's less likely to pass on its genetic material to future generations. If the mutation is beneficial - i.e. improves the chances of survival and/or breeding - the genetic change is more likely to be passed to another generation. Note that a mutation doesn't need to otherwise benefit the creature to be beneficial to the continuation of that genetic pattern; it's all about reproduction.

The overwhelming majority of mutations are neutral; they have neither effect and may even be repaired by the cell. In many cases, though, these genetic changes are simply passed on through the generations doing neither harm nor good to the genetic "fitness" of that creature.

Which brings us back to this cool podcast.

when gene duplication was first noticed and realized to be important, most researchers thought that what it did was give you one copy of the gene that could continue performing its original important function, and another copy that natural selection could then experiment with to find a new function. But in your paper you talk about the fact that it might be the case that both genes wander off to find new functions.

Rather than my summarizing it, go give it a listen or read the transcript. It's totally cool and really well explained. Genetics are so neat!

(And if you want to learn more about molecular biology, I recommend Dr. Zach's Evolution 101 podcast. Pause the playback of the current episode (grrr) and scroll down to episode 108 "Molecular Biology Primer". Good stuff, which, because of when I first listened to it, I now probably irrevocably associate with doing a jigsaw puzzle in the Egyptian House in Penzance, Cornwall.)

Peeking into the switching center 2007

Embarcadero Center at night in December 2007

There's a fine cocktail geek writing project called Mixology Monday in which everyone is encouraged to write on a particular theme each week. Often it's an ingredient, but this time, it's pre-Prohibition cocktails, in honor of Repeal Day (which is December 5th).

As my first foray into MxMo, I'm pleased to present The Ruby, which Joe & I found in a cocktail pamphlet from 1908 called The World's Drinks And How To Mix Them by William "Cocktail" Boothby. It's unclear if the recipe has appeared anywhere else. It's certainly not the same recipe as others going by the Ruby name.

Into a mixing-glass place a lump of ice, a dash of Orange bitters and a dash of cherry cordial. Add half a jigger of Sloe gin and half a jigger of Italian vermouth; stir until cold, twist in the oil from a piece of lemon peel, strain into a cocktail-glass and serve."

Sadly, the thing we forgot to buy in London was really good sloe gin, so I can't really say I've yet tasted this as it's meant to be tasted. However, even with cherry Heering and DeKupyer Sloe Gin, it's a charming drink. We celebrated with it last New Year's Eve (photo left by my friend Ann Larie).

It's tart and sweet and fun, and as you might guess from the name, a gorgeous color.

Our friends Mark and Rose have an annual cookie exchange party.

and boy are they tasty!

Next time I looked at the table it was gone.

Wanted to try out my new Zyliss channel knife but didn't feel like a cocktail tonight, so I just put a tightly wound twist in my glass of water. Over an hour or so it unwound and ended up like this. Love those air bubbles! They remind me of these silver sugar balls my Mum had for cookie decorating when I was a kid.

Spotted! The rare Joe in his native environment! 2007

Yes! TWO meals with bacon in one day. My life is good.

Yes, that's right; the traffic on the Bay Bridge tonight was so bad that it was faster for my friend Beth and I to get home by way of the Richmond - San Rafael and Golden Gate bridges.

my breakfast at J's Pots of Soul

Since this was actually around 1pm I was too hungry to fiddle with learning the new camera better to get a less over-exposed photo.

eggs, grits & bacon with a glass of grapefruit juice and an English muffin

Joe got a catalog of gift baskets (CatalogChoice.org here we come, jeez) and it had this interesting diagram on the back cover.

This is of course direct fallout of the 21st amendment, ratified Dec. 5th, 1933, which repealed national Prohibition and allowed states to make their own rules.

Of course this momentous event is celebrated:
www.repealday.org